The Death of Aging with Aubrey de Grey

But isn’t avoiding death the most natural thing in the world? We are the products of over a billion of years of evolution, and at each step, our ancestors have been trying to avoid death and procreate.

In our lives, the prospect of getting older and dying is seen to be an eventuality – and for good reasons. But there are some in the world who see the inevitable degradation of the body as just a biological engineering problem – and one that can be solved.

My guest today, Aubrey de Grey, is one of these people. He’s a British biomedical gerontologist, chief scientist and founder of the SENS Research Foundation, an institution focused on using regenerative medicines to repair damage underlying the diseases of aging.

Aubrey has been on a crusade against aging for decades, and in that time, we’ve made significant amounts of progress, so much so that Aubrey claims that the first person to live to a thousand is alive today.

Some optimistic estimates state that we may solve this age-old problem by as early as 2030, with other estimates spanning a few decades.

It’s not a question of if, but when.

And say it does indeed become possible to forestall death seemingly indefinitely, what then? Will we there be a moral imperative to make these technologies available to everyone on earth?

I think so. Though, to be honest, it seems a bit absurd to say that in a world where we can’t even guarantee everyone on earth the basic conditions for life.

These technologies will give us the freedom to explore the world and its beauty indefinitely. Having the choice to embark upon the greatest adventure, death, will be one that I think people will demand control over. The contentious issue of euthanasia may see resolution.

These are just some of the moral quandaries we are likely to be faced with as these technologies develop – but we need to be discussing them now.

I’ve been following Aubrey’s work for a number of years, and I was extremely excited to have him on the show. In our conversation, we talk about how he go involved in the industry, a bit of science involved and what things look like moving forward.

Use of Gene Therapy on BioViva CEO 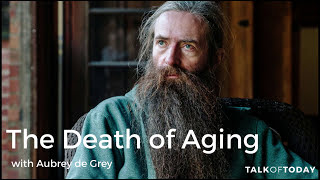 The Death of Aging with Aubrey de Grey

The meaning of life is to live forever – at least, this is what Google’s AI chatbot responded with when asked the greatest existential question just a few years ago.Some may think of this as fundamentally wrong – violating some unwritten, but an implicit law of the universe.